SIGN UP TO THE NEWSLETTER BELOW, USING YOUR SOCIAL ACCOUNT OR EMAIL
SpotifyFacebookYouTubeTwitterEmail
Thank you for signing up!
THANK YOU!

Thank you for registering! We have sent a confirmation email to {USEREMAIL}. Click the link to confirm your email address.

Please check your spam folder for the email, if it does not arrive, click this link...

resend verification emailCancel
Emails will be sent by or on behalf of Universal Music Operations Ltd, 4 Pancras Square, London. N1C 4AG, UK. +44 (0)20 3932 6000. You may withdraw your consent at any time. See Privacy Policy at https://www.umusic.co.uk/privacy.html
By ticking the SMS opt in box and submitting this form, I agree to receive text messages from and about The Jam (including prerecorded and/or by autodialer). Up to 20 messages per month per opt-in. Consent is not a condition of any purchase. Msg & data rates may apply. See Privacy Policy and Terms for further information.
Privacy Policy | Terms & Conditions 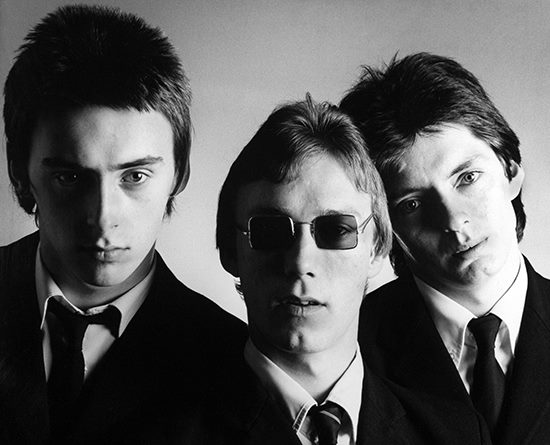 In May 1977, a three-piece rock group from Woking appeared on Top Of The Pops. You can see what happened on YouTube: the presenter announcing an ‘effervescent new 45 called ‘In The City’, and the 140 seconds of wonderment that followed. The song fizzed with the energy and sense of purpose that was firing what had been called punk and was now mutating into New Wave, but it had a lot more: a melodic charge – as in the glorious opening riff – that betrayed its makers’ love of classic British pop, and the clear sense that the band’s main creative force was already thinking like an accomplished songwriter.

Between 1977 and 1982, the band released an incredible array of music. In the UK, there were five albums and 17 singles, a stack of number 1s, and a journey which encompassed no end of influences, styles, and textures.

Their debut album ‘In The City’ was recorded in just 11 days and featured a mix of R&B covers and originals, with more than a nod to Wilko Johnson and Pete Townshend. The follow up ‘This Is The Modern World’, released only 6 months later, cemented the look and feel of the band and peaked in the British charts at number 22. ‘All Mod Cons’, released late in 1978, was a turning point in The Jam’s career; Weller’s song writing was becoming more melodic and lyrically incisive. Now more Ray Davies than Pete Townshend. The album was a major success, peaking at number six on the U.K. charts.

‘Setting Sons’, released at the end of 1979, was a huge follow up, climbing to number 4 in the U.K. It remains one of The Jam’s most critically favoured albums and marks the point the band became full-fledged rock stars in Britain. By the time ‘Sound Affects’ arrived in 1980 the band seemed unstoppable, the album went to number 2 and the 3 ensuing singles all hit top 5. 1982’s ‘The Gift’, the band’s only number 1 album, showcased Weller’s new found soul infatuation and with it came his frustration with the band’s musical direction and he made the decision to disband the group. On the heels of the number two hit ‘The Bitterest Pill’ and at the peak of their success The Jam announced their breakup in October of 1982.